The 1-hour television special ULTIMATE FREEDIVE: THE GREAT BARRIER REEF is being launched this week at the international television convention, MIP, in Cannes.

Produced by Sydney-based production company, GraingerTV, the programme is being shown by London-based TV factual specialists TVF International to major networks such as National Geographic and Discovery Communications.

National Geographic has already bought the previous GriangerTV production THE WHALE WHISPERER which features the whales of Hervey Bay in all forms of behaviour.

ULTIMATE FREEDIVE: THE GREAT BARRIER REEF features world champion freediver Marina Kazankova on a series of challenges, from swimming with turtles and giant groper, to diving on ship wrecks and through awesome caves.

One challenge at a time, all on a single breath of air.

Capable of holding her breath for 7-minutes at a time, Marina travels to the iconic Heart Reef, swimming around both its outer coral walls, and along its inner lagoon.

She takes on raging horizontal waterfalls, swimming through boiling waters surging out of coral lagoons.

And she encounters a giant whale shark, swimming freely alongside it for long periods.

From freeing trapped sea birds to following turtles as they lay hundreds of eggs, Marina experiences the very best of the Great Barrier Reef.

Her journey takes her from the Hardy Reef, off the Whitsunday Islands, way south, to Lady Elliot Island, exploring coral cays, and encountering an array of vibrant coral formations and dazzling sea creatures.

All of this, as the full moon triggers the spawning of coral, a phenomena that Marina experiences on a series of night dives.

Filmed on glorious super high-quality 4K, ULTIMATE FREEDIVE: THE GREAT BARRIER REEF is captured on 6 cameras, from drones above to a series of cameras beneath the waves.

And what they capture shows an impressive series of challenges that brings Marina face to face with the very best of the Great Barrier Reef’s corals and creatures.

Producer/director Greg Grainger believes the program will get a very wide screening internationally. “There is a shortage of programmes in 4K, particularly in Asia. We have captured some breath-taking events and creatures on the Reef, and we’re confident that the programme will resonates with tens of millions of viewers around the world.” 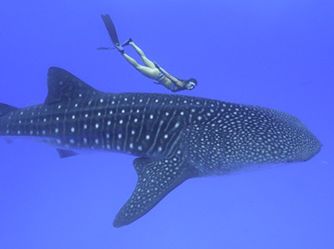