The series - FUTURISTIC CHINA – has taken Grainger and team from Beijing to the Great Wall, of China, Tianjin, Qingdao, Chengdu, Baoding, Shenzhen and the resort island of Hainan.

While the series is primarily business oriented, it does have travel and cultural aspects.

FUTURISTIC CHINA showcases a China that is making enormous progress in key areas of the economy.

From artificial intelligence to future energy, from innovation and new tech, China is making advances at a breath-taking rate.

Other episodes feature CULTURE with big business at work in the food industry and the BUSINESS OF TOURISM on the southern resort island of Hainan.

This series takes viewers to the heart of development, speaking to the business leaders who are implementing strategies designed to meet the Central Government’s commitment to leading the world.

FUTURISTIC CHINA is being screened concurrently in Australia on Sky and across China’s www.people.com.cn network to a viewing audience of 81,000,000 followers.

The series are will be launched to the international market by TVF London at MIP in Cannes April 2018. 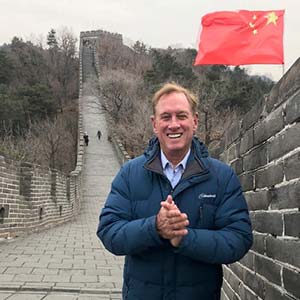