One series, CHARMING CHINA, launches this coming weekend, with a Grainger TV crew flying to Sichuan province to film a 30-minute travel special, featuring giant pandas, Sichuan cuisine and historic villages such as Dujiangyan. This special, set to air on the Seven Network and People.cn in early July, marks 10 years since the devastating Wenchuan earthquake which claimed over 80,000 lives.

CHARMING CHINA follows the success of the 7-part series FUTURISTIC CHINA which has just gone to air on the Sky Network on Australia, and across China on People.cn. That series was filmed from December 2017 through to February 2018, and featured stories filmed in Beijing, Tianjin, Qingdao, Hainan, Chengdu and Shenzhen.

LIVE BROADCASTS are also part of the specials broadcast by People.cn with teams from both that network and Grainger TV working together in outback NSW this past fortnight on the Royal Flying Doctor Service’s 90th anniversary flight by 25 vintage aircraft.

From that collaboration, People.cn transmitted a live one hour broadcast across China with 2 feature reports now being transmitted, while Grainger TV produced a 30-minute TRAVEL OZ special due to go to air on the Seven Network in mid June. This joint series of broadcasts was supported by Destination NSW.

People.cn and Grainger TV are now planning a series of new television ventures. Says Mandy Xue, general manager of People’s Daily Online Australia, “The partnership has enormous benefits for both China and Australia. On the one hand, we are able to show China to Australian audiences, while Australia’s best travel destinations are featured to audiences of up to 8-million viewers across China.” 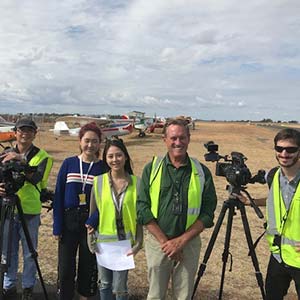