TV producer GREG GRAINGER has been honoured with the Top Travel Broadcaster award by the Australian Society of Travel Writers.

The award was presented at the ASTW’s annual convention in Cape Town South Africa by Shelley Winkel of Tourism and Events Queensland.

Two of the three TV programmes that Grainger submitted for the award were filmed in Queensland.

One was a 1-hour international TV documentary ULTIMATE FREEDIVE: THE GREAT BARRIER REEF, in which Grainger and crew filmed world champion free-diver Marina Kazankova in a series of challenges, from swimming with spawning coral to free-diving with a giant whale shark.

Grainger also filmed the great characters of outback Queensland in a road trip that stretched from the cattle auctions in Roma through to a marathon staged at the Porcupine Gorge, north of Hughendon.

The third TV special judged was the TV series MY DUBAI, in which Grainger followed major events from the world’s richest horse race, the Dubai World Cup, through to a concert by Sting.

The Barrier Reef program will be screened internationally by major networks such as National Geographic, while the Dubai and Queensland character stories were badged as Travel Oz episodes and broadcast on 7TWO on Saturdays.

Grainger acknowledged that producing these programmes is a team effort: “I’d like to give a big thanks to the talented team that supported me with production…. Harley Rossetto, Brent Spillane, Toby de Jong, and Paul Moses on camera, Justin McCoy for his original music and Marcus Fonseca for his wonderful graphics.”.

Grainger’s prize is a trip for 2 to Lady Elliot Island on the Great Barrier Reef. 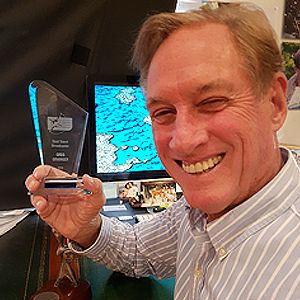