Plants and wildlife, in the islands surrounding Australia

WILDEST ISLANDS OF AUSTRALIA shows the enormous diversity of both plants and wildlife, in the islands surrounding Australia.

Kangaroo Island is featured, with its own sub-species of kangaroo, as well as koalas and sea lions.

On Rottnest Island, off the coast of Western Australia, there's the very friendly marsupial, the Quokka.

And on Montague Island, off the far south coast of Australia, penguins and seals mix with whales and dolphins.

Finally, there's the extremes of the sub-Antarctic on Macquarie Island, with huge colonies of colourful king penguins. 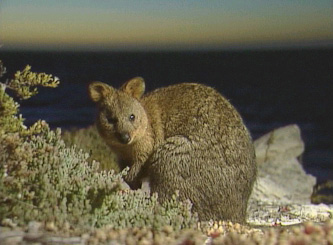