The stunning, awesome, majestic, chilling beauty and grandeur of the Antarctic and its wild creatures, all in dramatic action sequences.... from penguins and seals to whales and birds.

Not only great action, a compelling highly topical storyline: The many real threats to this pristine paradise and its wildlife.

* Minke whales prowling the edges of an ice floe, watched by wary Emporer Penguins, who finally plunge in.

* A leopard seal stalking Adelie penguins, finally catching and killing one and then playing with its carcass.

* King penguins walking with eggs and chicks on feet.

* Monster-sized elephant seals snapping at and biting each other.

* Fierce catabatic winds sweeping off the polar plateau into the sea.

* Underwater scenics: Ice formations below the surface, including krill.

* Penguins of all species feeding their young and stealing rocks for their nests.

* Huge colonies of Magellenic Penguins rushing down beaches into the water, as they begin their winter at sea.

* A colony of Emporer Penguins in a blizzard.

This programme documents key behaviour, such as fighting, feeding and mating with the major penguin species, from giant Emporers and Kings to cute Chinstraps, Adelies and Gentoos.

It also captures the true essence of the Antarctic: Its awesome scenery and ice formations, its ferocious weather. Brilliantly shot during five expeditions, this is documentary stirs the soul, and captures the imagination. 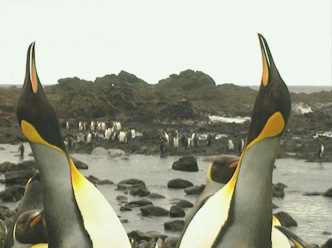