TAMING THE TIGERS is a gripping one-hour documentary showing the unique relationship between trainers and tigers in captivity.

World champion freediver Marina Kazankova is on a mission.

The programme addresses the question of whether tigers can be tamed or simply trained, with stories aplenty of tigers that have lost control and attacked their keepers.

Tiger trainers around the world have been filmed for this special: from legendary Russian entertainer Nickolai Pavlenko; to Hollywood tiger specialist Rick Glassey, the man who teaches his tigers to perform for major movies.

There are also moments of wonder as the cycle of tiger mating and birthing is recorded at a facility in Thailand. Rare footage of a tiger giving birth is shown, after which the new-born cub suckles from a large sow.

One sequence involves tigers swimming, others show tigers being trained for public performances: leaping through hoops of fire, and walking on tight ropes.

In one dramatic scene, 10 tigers walk side by side around a ring, controlled by one lone man and his baton.

These are evocative images of powerful and innately aggressive animals, as they learn to trust and work with Man.

And while they first appear to be big harmless pussy cats, their behaviour is anything but. One of the keepers being filmed has to be hospitalised after a particularly vicious attack. 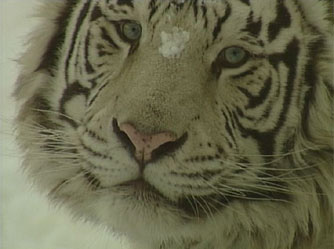