With predictions of polar bears being extinct in 50 years, On Thin Ice follows bears as they emerge from their dens and navigate their rapidly changing environment. On Thin Ice shows how the frozen expanses of the Arctic are shrinking at an unprecedented rate, with the very survival of the polar bear literally on thin ice.

Over the last year, producer/presenter Greg Grainger has mounted a series of expeditions across the Arctic to document the plight of the polar bear.

* Researcher Nick Lunn tranquillises polar bears from his helicopter, cataloguing the diminishing health of the Western Hudson Bay bear population and finding the remains of a bear thought to have died from starvation.

* Close and wild encounters with rangers from the Polar Bear Alert team as they chase bears out of the township of Churchill, built in the middle of the bears’ migration route. Follow one family of bears that have to be darted after they attempt to break into a building food for food, while another bold bear becomes trapped inside a garbage truck.

* Hungry bears and husky dogs fighting one another at an isolated weather station north of Norway.

* Polar bears in the wild as they capture seals and devour whale carcasses.

There is no more iconic symbol of strength and adaptation to survival than the polar bear.... an animal so superbly suited to its environment that it thrives in the most hostile corners of the planet – until now. 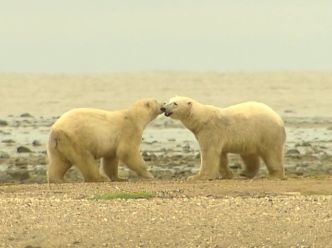