Miracles from the Wildside

MIRACLES FROM THE WILDSIDE is an endearing, heart-warming documentary about the special relationship between disabled people and animals, and how those creatures are able to help generate discernible improvements with both physical and emotional problems. This is an incredibly emotional film, with plenty of tears and joyous moments as overjoyed parents watch their disadvantaged children make seemingly miraculous recoveries.

The documentary begins with a treatment known as dolphin therapy, where autistic and emotionally disadvantaged children are rewarded in therapy sessions by being allowed to swim with captive bottlenose dolphins. The dolphins display a real sensitivity to their patients, while real improvements in behaviour are witnessed with the youngsters. For instance, Svea, a delightfully cheeky 14 year old girl from Germany, has begun to walk and is making big advances with her speech after a series of sessions over 2 years at Dolphin Cove Florida. The programme goes on to show similar recoveries with other children.

Next we watch disabled and even visually impaired people learning to mount and ride horses, an amazing sight in itself. These people are so envigorated by this experience, that they go on to compete in the world championships for the disabled, an event being staged in Belgium in the lead up to the 2004 Para Olympic Games in Athens.

Therapy animals feature cats, guinea pigs and giant rabbits taken to HIV-infected children in downtown Los Angeles. The looks of delight are a joy to behold, as the animals open the hearts and minds of the youngsters. We also look at a giant Macaw parrot, used by a Hollywood lawyer to helpcure his medical problems.

Finally there are the wonder dogs, some trained to help and guide blind people, others known as assistance dogs, cunning canines that open fridge doors and retrieve food and drink, call emergency telephone numbers and lift their owners in and out of bed.

Throughout the question is posed: Do the animals possess some sensitivity or depth of understanding that we can not comprehend? Is a miracle taking place? MIRACLES FROM THE WILDSIDE shows a series of recoveries which suggests that miracles really are taking place. 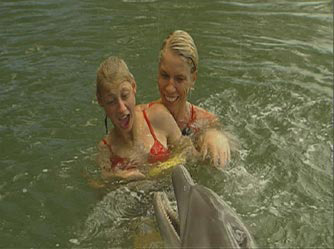