Love in the Wild

A love story with a difference

Here is a love story with a difference....the players wild animals, displaying the tenderest scenes of love and affection. In this very emotional one-hour special, Love in the Wild gives an insight into the mysterious world of the animal kingdom: a complex web of social behaviours and rituals, emotions and instincts. Love in the Wild vividly illustrates that even though their lives are laced with peril, one aspect is also one of the most beautiful visions on Earth. From courtship and mating, to the way they play, rear their young and protect their families, no sight in nature is more moving than Love In The Wild.

Those themes are explored in depth, beginning with romance in the wild: The art of courtship, usually beginning with well-rehearsed, often rather strange displays; vigorous bobbing from a female koala on heat, aimed at attracting a mate; Rheas prancing around their partners-in-waiting in a highly-ritualised parade; mutual grooming from Madagascan ruffed lemurs; the cheetah¹s dramatic quest for a partner; extreme affection from rainbow Lorikeets; concluding with the extraordinary display of the male lyrebird.

The most spiritual of all animal interaction, that of mating, is depicted with great sensitivity. The guanacos of Patagonia, procreating in an event venerated by the entire family group. Also lions, koalas and echidnas.

Love in the Wild then looks at rearing: mother and baby tapirs; families of snow covered macaques in Central Japan; mother gibbons showing their youngsters how to drink; a litter of lion cubs feeding from mother; and the tantrums of a nestful of Mistle-toe birds.

Love in the Wild moves on to the protection of territory. A David and Goliath stand-off in the Serengeti National Park in Tanzania, where a family of baboons wages a tense war of nerves with an equally indignant lioness; the crafty and potentially dangerous ploy of pied stilts to lure predators away from their homes; Coatamundis opting for numbers to outwit their foes; the unique method of gannets for marking tiny territorial boundaries; and the physical force used by koalas to repel rivals.

The final segment is the most moving, that of play. A big litter of lion cubs wrestle and torment one another; baby elephants splash about in the Okavango Delta; and a hillside of Macaques frolick in the snow of Central Japan.

As Love in the Wild concludes, animal affection takes on a myriad of forms and serves countless functions. It is bound by ritual, governed by instinct and necessity. Above all, it's about extreme tenderness and compassion. 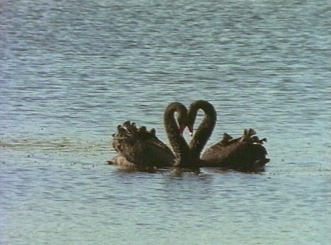