Guardians of the Wild

Characters from around the globe who have a special rapport with endangered species of wildlife. Every single day, fifty different species of animals disappear from this planet , with this group of individuals offering real hope for the long-term survival of the wildlife they're caring for.

* Join Randall Jay Moore on safari in the heart of Botswana's wildlife-rich Okavango Delta as he works with a group of tamed African elephants. The issue of culling is raised, as Randall's men deal with a rogue wild bull elephant. Randall's team of elephants show off their tricks, after starring in major motion pictures like 'The Power of One'.

* At Oudtshoorn in South Africa, Mandy and Bonnie Schumann have committed themselves to breeding and taming cheetahs, the world's fastest animal now rapidly heading for extinction. Footage includes two new born cubs being hand-reared in the twin's home.

* Saving African wildlife of all breeds is Les Carlyle's passion, as he heads up a massive project to restock former South African farms with game. Exciting footage on a night-hunt, with rangers catching herds of impala and transferring them to new Games Parks.

* In the Channel Islands, John Hartley controls the Jersey wildlife trust, which breeds endangered species and returns them to the wild in projects around the world. Fascinating pictures of Lemurs from Madagascar being handled.

* In Britain, Ruth Murray saves badgers from slaughter, while off the coast of Australia, Erna Walraven studies the Little Penguin as its numbers plummet. 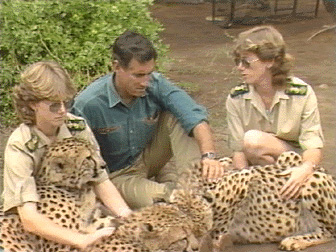