The splendid vision of a fully grown polar bear leaping high into the air, and crashing back, head first, into solid ice is transfixing. Over and over, this beautiful creature tries to smash through two metres of ice. The hours pass, the bear relentlesssly smashing his way slowly through to the freezing waters below. Finally he succeeds, diving quickly and deeply, before emerging with his prey. Bright red blood covers much of his white fur, as he drags a struggling seal high onto an iceberg, directly in front of a towering glacier.

These are powerful images, captured deep in the Arctic Circle after weeks of patient tracking. Bears from two regions of the North are tracked and filmed in this superb feature, starting with those found off the island of Svalbard, halfway between Scandanavia and the North Pole.

What emerges in this program is a sense of wonderment, that such huge and beautiful creatures are in fact brutal killers. The images we show are of bears hunting and playing, all set to scenes of splendour... blue glaciers, towering ice bergs, falling snow. 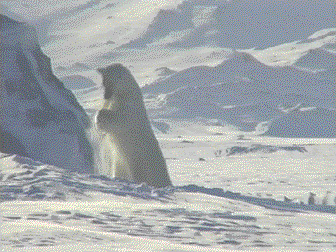