The Beast Within - Living with Wild Animals

THE BEAST WITHIN - LIVING WITH WILD ANIMALS follows colourful individuals around the world who live with animals normally considered wild and dangerous.

The program examines their motives and shows the strong bonds established between man and beast.

* The Thai businessman who's pet elephant rampages around his living room, following instructions, painting murals and washing the family car.

* The Colombian diver who loves the Caribbean so much he's saved hundreds of sharks, dolphins and turtles which now circle his isolated island retreat.

* The Canadian environmentalist who shares a house with tame bears, monkeys and lynx.

* The Australian ex-circus owner who shares the family swimming pool with swimming tigers.

* The Thai women who live with endangered gibbons that create havoc in their home.

* The Minnesota mother who takes her tamed lemurs and coatamundis shopping and banking in the family car.

* The Miami zoo keeper who cares at home for a delightful orangutan which has cerebral palsy.

* The Tiger Monks who have raised 9 orphaned tigers since birth and now take them for a walk to a quarry where they play games with them and ride them like horses.

Many of the animals featured have been confiscated or abandoned, others are being saved from extinction. Whatever the reason these relationships have some startling consequences. 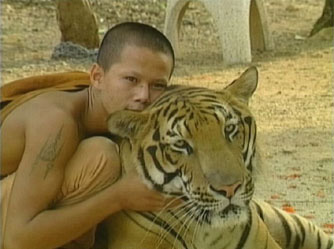