In the Wake of the Vikings

IN THE WAKE OF THE VIKINGS documents a modern day adventure in the same waters sailed by the great Viking explorers, Erik the Red and Leif Eriksson, in Greenland and Iceland a thousand years ago.

* Sailing on the Viking battleship, the Islendingur, as it celebrates the famous voyages of Leif Eriksson when he discovered America.
* Greenland's largest celebrations to honour the Viking voyages.
* The re-created house and church of Erik the Red.
* Descendants of the Vikings.
* The Inuit influence: highly colourful villages and customs.
* The well preserved mummies of six women and two children frozen when their kayak overturned.
* Calving glaciers, spouting geysers.
* Wildlife: musk oxen head-butting, caribou, and whales bubblenetting under the midnight sun.
* The very formidable Greenland Ice Cap.
* The Sondrestrom Incoherent Scatter Radar Facility which monitors the Aurora Borealis, the Northern Lights.
* An abundance of wild flowers, including Greenland's national flower, the broad-leafed willow herb, or Niniarsiat, which means "young maiden", and Arctic cotton.
* The Greenlandic National Dress.
* The world's largest mail box, erected to handle all of the mail children the world over send to Santa Claus.
* The pure Icelandic horse, which has two more gaits than other horses.
* The imposing Gullfoss Falls. 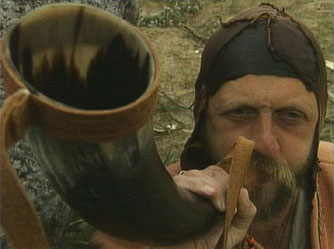