Across the Sea of Galilee

A stirring film of peace and hope

A stirring film of peace and hope, timed to coincide with real Peace in the Middle East. This highly topical special shows the rich diversity of modern life in Israel, as the historic Arafat Peace agreement was being negotiated. A series of adventures through Israel, camel riding across the Negev Desert to meet nomadic Bedouin tribesmen, living on a kibbutz on the Lebanon border and driving tanks in the Golan Heights.

The documentary also records the daily lives and views of Jews, Palestinians and Christians. We learn how they perceive their country at this time of change, how they deal with constant war and the conflicts of different religions. They also reveal how they celebrate religious and folk festivities and how they indulge when it all gets too much!

Other highlights include traditional fisherman on the Sea of Galilee, apple picking on a Kibbutz as war planes thunder overhead, and female soldiers on the Syrian border, with some of the most sophisticated tanks in the world in action.

The program records stirring scenes at a Bar Mitzvah, a Shabbat dinner, and a Jewish wedding. Greg Grainger visits the ultra-orthodox Jews of Jerusalem's Mea Shearim district, dressed in eighteenth century styles from Eastern Europe. Almost all of the men wear glasses, their weakened eye-sight the result of spending most of their waking hours studying the Torah. Only the women work, their heads shaved so as not to distract their husbands.

At giant absorption centres, Jewish immigrants are still accepted at an astounding rate. There's a new Holocaust monument and tree planting ceremony in the Forest of Peace, along with Life in the occupied West Bank, with Albert and Grace Nasser typical of the Palestinians who have lived under Israeli occupation since 1967. Bethlehem's Church of the Nativity - erected on the site of the Holy Manger - is depicted, as is the Dead Sea, with its hilarious scenes of mud baths and floating bodies.

In the Negev Desert, share the home of one of the world's last remaining nomadic tribes, the Bedouin. We encounter Bedouin women and children tending sheep, and have tea with a tent full of Bedouin men. Also, the Hai Bar Biblical wildlife reserve, created to ensure the survival of animals from the Bible, like striped hyenas, desert fox, caracel, the white Oryx, and adyx from the Sahara - all rare animals. In contrast, there's the hedonistic approach to life in Tel Aviv, where the accent is on fast modern living: beaches, bikinis, discos, outdoor cafes and dancing on tables.

Finally, theres the real signs of peace: The village of Neve Shalom - dedicated to peace. A group of Jews and Arabs - both Christian and Moslem - live together in harmony. This Oasis for Peace was set up fifteen years ago by a Catholic monk, who wanted to establish a community for all three major religions. Today, Arab and Jewish teachers stand side by side in the classroom, their students required to learn in both Hebrew and Arabic at the same time. And the spectacular opening of the Maccabiah Games, the Jewish equivalent of the Olympics. 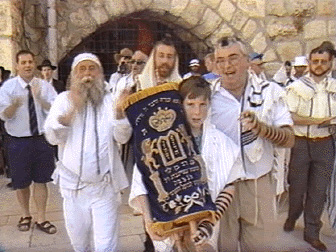