Captures all of the beauty and characters of the Southern Highlands, south-west of Sydney

HIGHLANDS CHARM captures all of the beauty and characters of the Southern Highlands, south-west of Sydney. From the running of the Bong Bong Cup, to the spectacle of the Tulip Festival in Bowral.

This programme includes grand estates like Milton Park and Mount Broughton, vibrant gardens like Kennerton Green, and historic villages like Berrima, which is toured in a restored Cobb and Co coach.

* The home where cricketer Sir Don Bradman developed his skills.
* Masked balls
* Local talent such as singer Margaret Urlich , Ginger Meggs cartoonist James Kemsley and round-world aviator Gabby Kennard.
* The historic role of the Scots, their Highland celebrations and ghost towns such as Joadja.
* A colourful hunt on the property GOLDEN VALE.
* The wilderness, with the limestone formations of the Wombeyan Caves and the steep formations of the Bungonia Gorge.
* A trip by the historic 3801 steam train into Robertson, with Raneleagh House, a charming guest house and Kevin Neels formidable collection of old grammaphones. 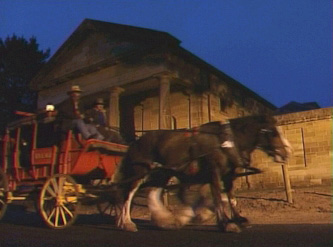