Covering the top destinations on the Mediterranean Sea

MEDITERRANEAN MAGIC is a one hour adventure, from producer/presenter GREG GRAINGER, covering the top destinations on the Mediterranean Sea, from Turkey and Greece, to Corsica and Sardinia, and the Cote D’Azur of France.

Sailing on a magnificent barquentine, the program features gale-force winds and near collisions, the fire-fighters of Corsica, the cork-makers of Sardinia, and the Pelican man of Astipalea.

There are acrobatic crew members like Alp Oz, swinging high in the rigging, and a charismatic Caribbean singer on the bow sprit.

* Remains of the Mausoleum, King Mausolus' Tomb, one of the Seven Wonders of the Ancient World in the Turkish port of Bodrum, guarded by the imposing medieval castle of St. Peter.
* Gigantic tombs for royalty and the rich, dating back to the Lycian era, carved into a mountainside along Turkey’s Dalyhn River.
* The Dance of the Sickle from a troupe of Greek performers as the barquentine sails across the Aegean Sea under a full moon.
* A performance of the Sousta in a remote village of Rhodes called Embona.
* A donkey ride up the dream island of Santorini, with its white villas perched atop sheer volcanic cliffs: * The independence singers of Corsica.
* A traditional Greek wedding, high-stepping soldiers, the Acropolis, and the Miss Universe contestants in Athens. 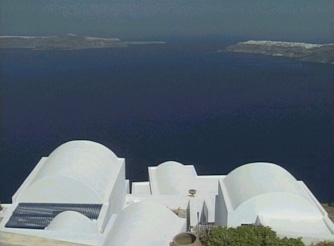