The ultimate adventure in the frozen north, travelling from the Arctic Circle in Finland on a trip that ends close to the North Pole. This is documentary with a superb mix of adventure, characters and wildlife.

The first encounters are with the colourfully-dressed Samis, Laplanders who celebrate their Arctic culture by catching and racing reindeer. Their celebrations include championships in which Samis have to demonstrate their skills with the lasoo.

The action switches to an ice breaker as it smashes through the frozen northern seas. Modern Finnish maritime heroes demonstrate how they swim amongst the ice bergs for recreation.

Travelling by dog sleds across Finland's frozen north takes us to isolated cabins, to experience the Finnish passion for taking hot saunas, then rolling in the snow.

There's even a meeting with Santa Claus, an employee of the Finnish post office who's supported by computer-equipped "helpers" to answer the thousands of childrens' letters that are sent to the North Pole.

Midway between Scandinavia and the North Pole, the spectacularly beautiful islands of Svalbard are explored by skidoo. A lone Norwegian guide leads us hundreds of kilometres into the wilderness in pursuit of polar bears.Along the way, travel deep underground in an eerily beautiful glacier.

The program climaxes with the discovery of a healthy two year old bear, which turns on a brilliant performance in pursuit of seals. Repeatedly he leaps high into the air, crashing his body back into the ice, before breaking through. Unforgettable scenes as he catches the seal and feasts on it. 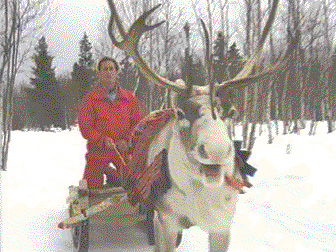