The unsurpassed scenery, wildlife, characters, and adventures of Alaska

Programme producer/presenter GREG GRAINGER travels on an expedition along Alaska’s wildlife-rich Inside Passage, and ends with one of the most gruelling endurance tests known to Man, the famous Iditerod dog sled race to Nome.

On the Inside Passage, viewers experience the awe of a calving glacier, and watch waters alive with killer whales chasing porpoise.

In the Kenai fiords, Grainger paddles a kayak through waters alive with creatures, along a spectacular and dangerous coastline.

In the Denali National Park, the programme tracks the most playful of Grizzly bear cubs, along with an amazing scene of a bear chasing a moose.

Over the Arctic Circle, the richness of Alaskan native culture is shown in a visit to a native settlement, complete with traditional clothing and dances.

* Humpback whales bubblenetting, a process whereby they consume hundreds of fish which they’ve trapped in spirals of air bubbles.
* The Tlingit tribe and their totem poles.
* Bald eagles on a massed fishing hunt.
* Stellar Sea Lions on their island rookeries.
* A thrilling helicopter ride through the impressive Juneau icefield.
* The Alaskan passion for salmon fishing and eating.
* The most magnificent historic timber buildings of the gold rush town of Skagway, and the narrow gauge White Pass railroad along the Klondike trail, offering us a taste of gold fever.
* Sail the mighty Yukon River by log barge.
* The snowy alpine paradise of Hatchers Pass, with its picturesque ruins.
* A flight around Mount McKinley, the mountain the Athabascan Indians call “The Great One”.
* The spectacular ice carvings of Fairbanks and its riverboat. 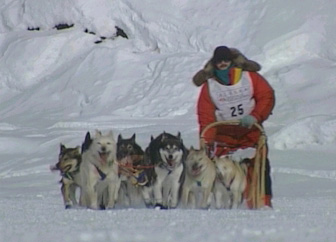