Simon De Lorm is a Lighting Cameraman with over 25 years of freelance television experience.

Initially based in South Africa where he was Johanneburg's top cameraman, for the past 10 years, Simon has filmed in Australia.

He's filmed a wide variety of projects around the world, from major sporting events to travel programs, documentaries, corporates and broadcast television.

Simon is experienced in a wide range of HD format cameras.

He has a passion for cycling, nature, exploring and creating Cinematic pictures. 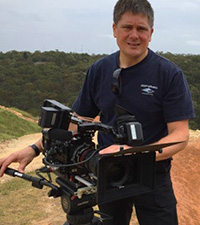